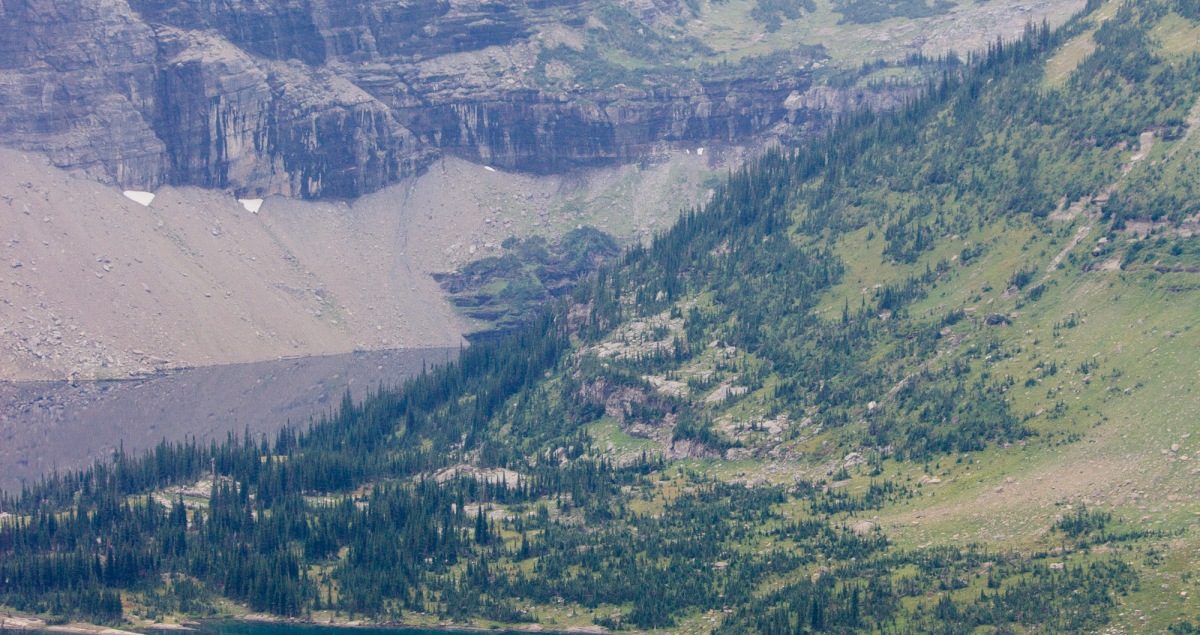 after heading out of the great falls starbucks last night, i drove back to the many glacier lodge and crashed in their parking lot for the night.  i had paused a few times to try to take pictures of the stars, so by the time i got back to the park it was a little before 1 am.  the air was dense and the roads were clear, so the turbo and i had quite a bit of fun making our way through the windy park roads to get to the lodge.

i woke up before dawn to drive around to the other side of the lake and set up camp for some sunrise shots.  i think sunset shots would be slightly cooler since the sun would be glinting off the lake and would cast a nice glow on the lodge, but the sunrise was certainly very pretty as well.

after chatting with a fellow photographer who had set up at the same location, i took off for going to the sun road.  this time, i was early enough that the roads were mostly clear and i had plenty of room to play around and take unobstructed pictures.  unfortunately, the clouds settled in pretty quickly and the lighting for the rest of the day was pretty poor for pictures…just one more day with the wide open skies would have been excellent, but the clouds and light rain set a tone that was pretty enjoyable, so i can’t complain.

when i got to logan pass (top of going to the sun road), i parked and went for a short hike to the hidden lake overlook.  again, the lighting was poor for pictures, but it was still very beautiful and peaceful.

after the hike, i dropped down the west side of going to the sun road and paused along the side of the road and made my way down to the lakefront.  i wandered around for a bit and then, since the cloud cover made landscape pictures seem bleh, i started taking macro shots.  in the process, i was reminded of just how beautiful forests and mountains are up close.  i’ve always gravitated to the wide angle, massive landscapes that inspire awe (probably something to do with my personality…), but there’s a lot of beauty in the details as well.

as my mind was circling this thought, another took form:  these details are closely related to the mindfulness that i’ve been working on lately and that i alluded to in my first post.  when you’re in a mindful state (or at least what i associate with the term — i’m certain i’m only scratching the surface of what true mindfulness is), you notice the things that you usually ignore:  the pressure of your weight on your feet, the way your chest expands when you inhale, the reflections of the light on the countertop, the way the forces of the universe pull you when you accelerate through the apex, and so forth.  for me, this is always followed by a deep appreciation for these details and a sense of calm, tranquil happiness.

between dropping my phone in the river yesterday and losing connection to the civilized world, the clouds inhibiting proper lighting, and being away from the regular stresses of the world, the world seems to be pushing me towards these details.  perhaps it’s some sort of mean reversion (had to get one math reference in there) that’s trying to keep me balanced between the mountains and the flowers…  the trick will be to keep this balance and mindfulness when i return to the civilized world.  it’s a bit harder to appreciate the details when you’re sitting in a computer chair and not watching a spider spin a web…

i suppose that’s a challenge of mindfulness that exemplifies the point — to appreciate that which isn’t obviously beautiful about life.  i’ll have plenty of time to turn that thought over in my mind during the upcoming days, but i like where this is going.