Note: This is part three of a series on my experience hiking the Laugavegur Trail in the summer of 2017. You can see the other posts in the series here. Enjoy!

Our second day of hiking started early. We were warm in our hut, but we were also in a pretty crowded space and we had the misfortune of sharing that space with a few snorers. That, combined with the fact that it’s only dark for about three hours at this time of year in Iceland meant that we were only able to get a few hours of decent sleep. We figured we might as well hit the trail early, and we were the first ones out of the hut!

Being the first ones on the trail was exciting at first, especially since some of the prior night’s fog had lifted and we had a pretty clear view of the path that lay ahead of us. It was also deathly quiet, which is an odd thing to experience on a mountain pass. No wind, no wildlife, no bugs, nothing. Very surreal.

The excitement turned to fear pretty quickly, though. The path down the mountain took us over a series of snow bridges – snow-packed areas that had been eaten out from below by streams created from snowmelt higher on the mountain. The trail clearly led across these snow bridges, and you could always see the footprints of yesterday’s hikers. What you couldn’t see, though, was how stable these snow bridges were. The first one we came to had actually collapsed on the far side and we were forced to find an alternate route. The thought of falling through a crevasse in these bridges and landing in a tiny river wasn’t very pleasant. Fortunately, neither of us fell through, and we were able to enjoy several hours of solitude in safety before some other hikers caught up to us.

The scenery during this stretch was vast and exquisite. We stopped for a break on the top of a little ridge a couple hours in, and we could look back in the direction we came and clearly see all the progress we’d made. Open up the full-sized image of the second panorama below, which was taken from this spot, and see if you can pick out the hut we stayed in and all of the tiny hikers heading towards us. On a smaller scale, the combination of the snow and the green vegetation and the black soil created striking contrast. It’s rare that you get to see such combinations of color contrast in nature, and the images I took here almost look fake (I assure you, they’re not).

After taking in the incredible views from the top of the ridge, we ventured on towards the Alftavatn caldera. The wind picked up quite a bit during this stretch, and we had to really bundle up to stay warm. The steam from the nearby hot springs helped a bit, but the noxious odor of sulphur kept us from wanting to stick around in the steam for too long… When we reached the edge of the caldera, we took shelter behind a boulder and ate some snacks while soaking up the spectacular views. We could peer off into the distance and see where we planned to camp for the night, at the Alftavatn hut right next to the lake.

After descending into the caldera we ran into our first river crossing! I was a little nervous about the river crossings on this trek, as I had never really done anything like that and I had no idea how difficult they’d actually be. Looking back, this first river crossing was one of the more dangerous ones. Even though the water was pretty low (calf deep in some areas and knee deep in others), there were a lot of rocks that we had to navigate. Walking on smooth rocks under water isn’t the most tranquil of experiences, even with shoes that have good grip. Fortunately, we made it across without issue and forged onto the Alftavatn campsite!

When we got to the campsite, we changed our minds about camping there and decided to push on the extra ~three kilometers to the Hvanngil campsite. We left the Hrafntinnusker hut so early that we had plenty of time to make it to Hvanngil. After a meditation and food break (we elected to munch on our own supplies rather than eating at the newly constructed restaurant) at the lake, we pushed on past the halfway point of the trail!

The stretch from Alftavatn to Hvanngil was absolutely gorgeous, and I’m so glad we did it in the afternoon light. The sunlight bathed the landscapes and created so many wonderful photo opportunities. We seemingly stopped every few minutes to just enjoy the lovely earth and be grateful that we had the good fortune experience it. Looking back, I think part of our joy stemmed from the fact that there was so much green around us…we hadn’t seen this much grass since the very beginning of the hike in the Landmannalaugar area! The difference in the scenery between the start of the day and the end of the day was so dramatic.

The final descent to the Hvanngil hut was beautiful as well, and we were fortunate enough to have beautiful light and clouds during this stretch as well. After setting up our tent and having a freeze-dried dinner, we rewarded ourselves with peanut butter spread over a chocolate bar (bringing these ingredients was the smartest thing we could have done) and headed to bed. We planned to get up for the following morning’s sunrise, which meant getting out of the tent at roughly 3AM. Early to bed, early to rise… 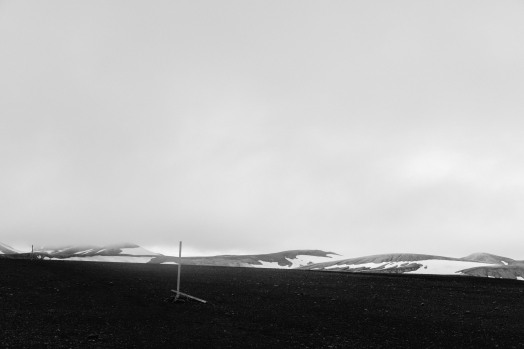 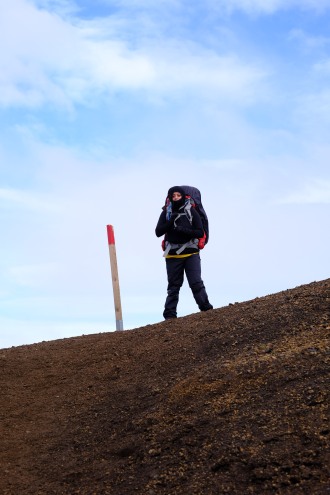 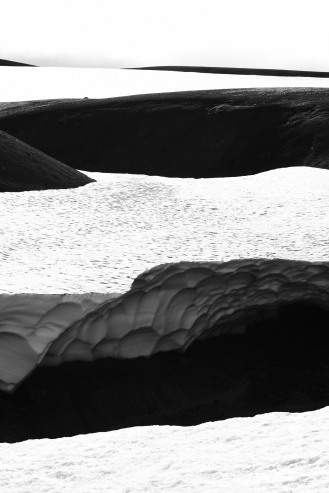 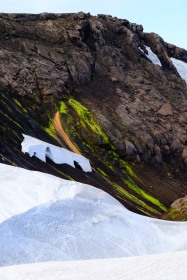 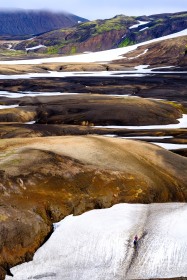 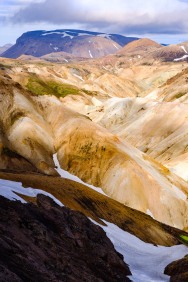 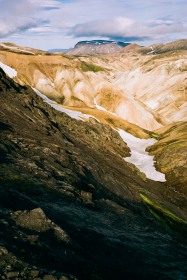 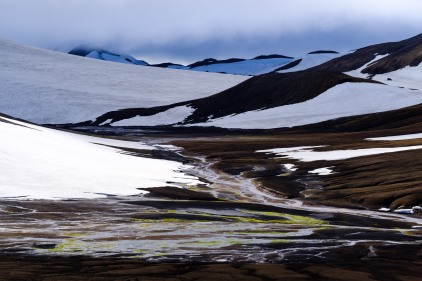 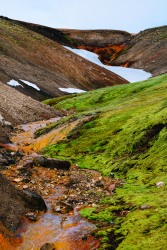 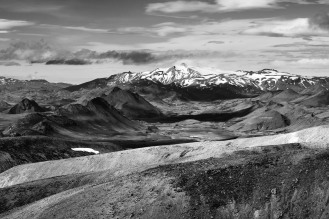 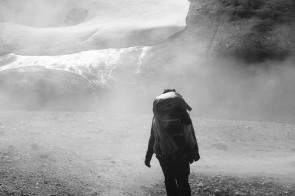 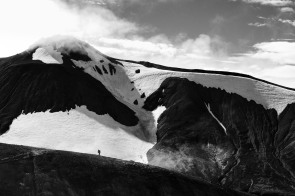 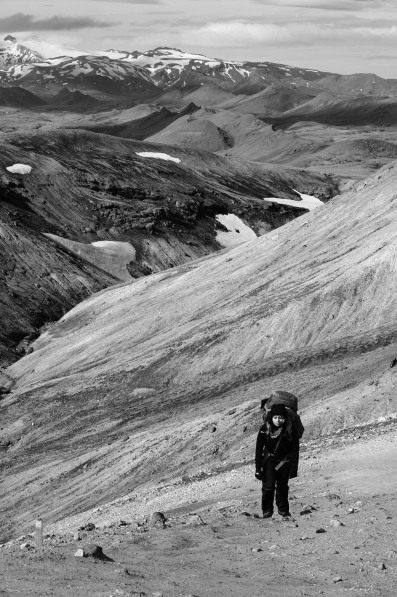 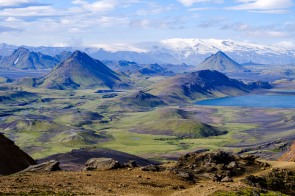 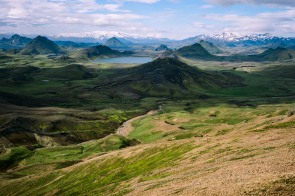 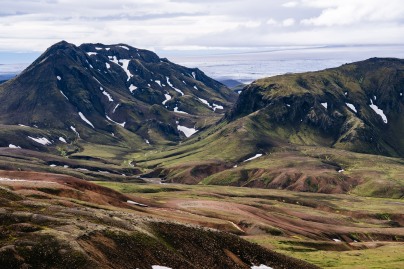 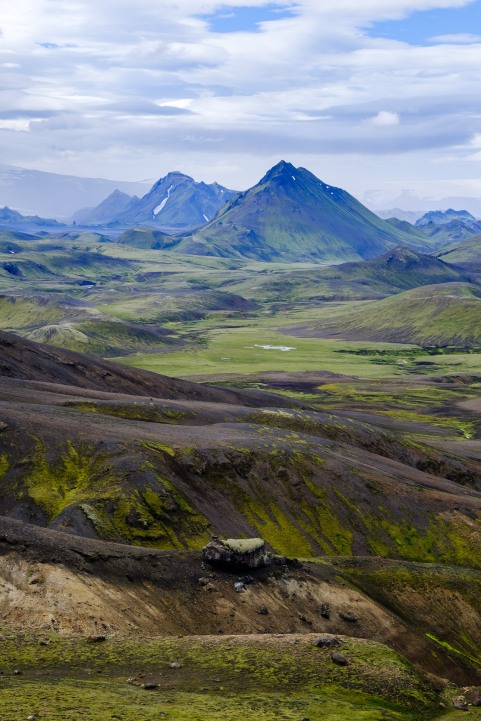 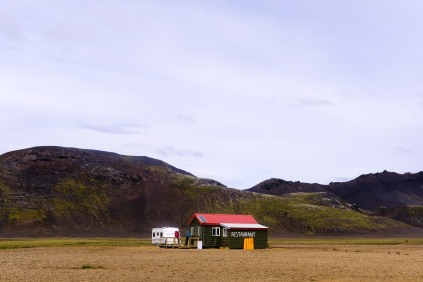 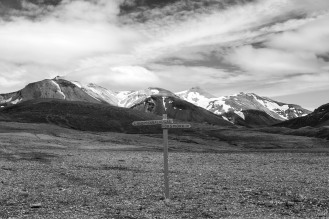 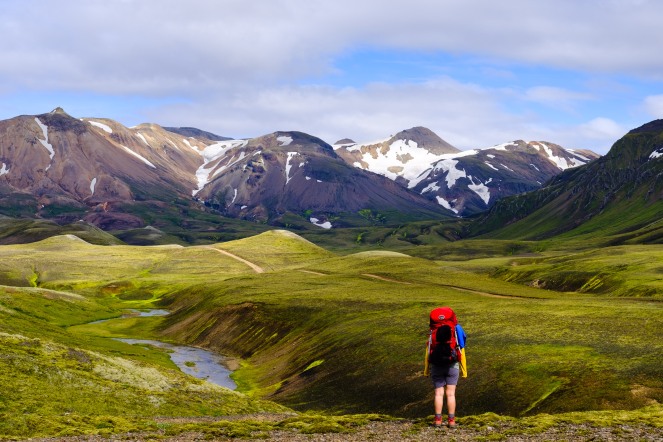 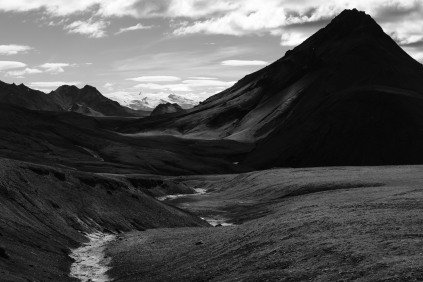 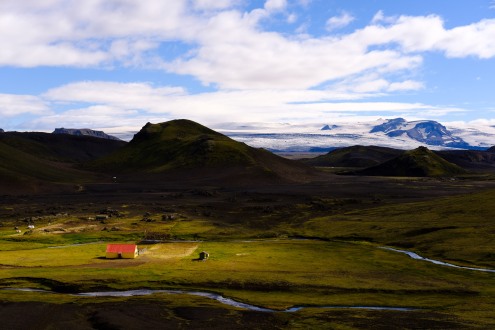 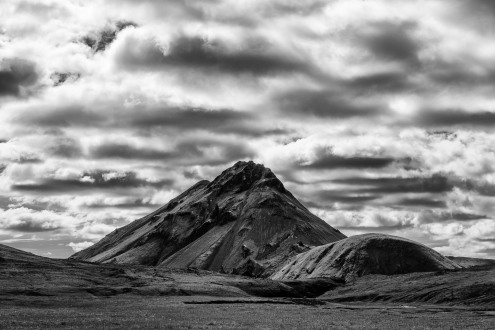