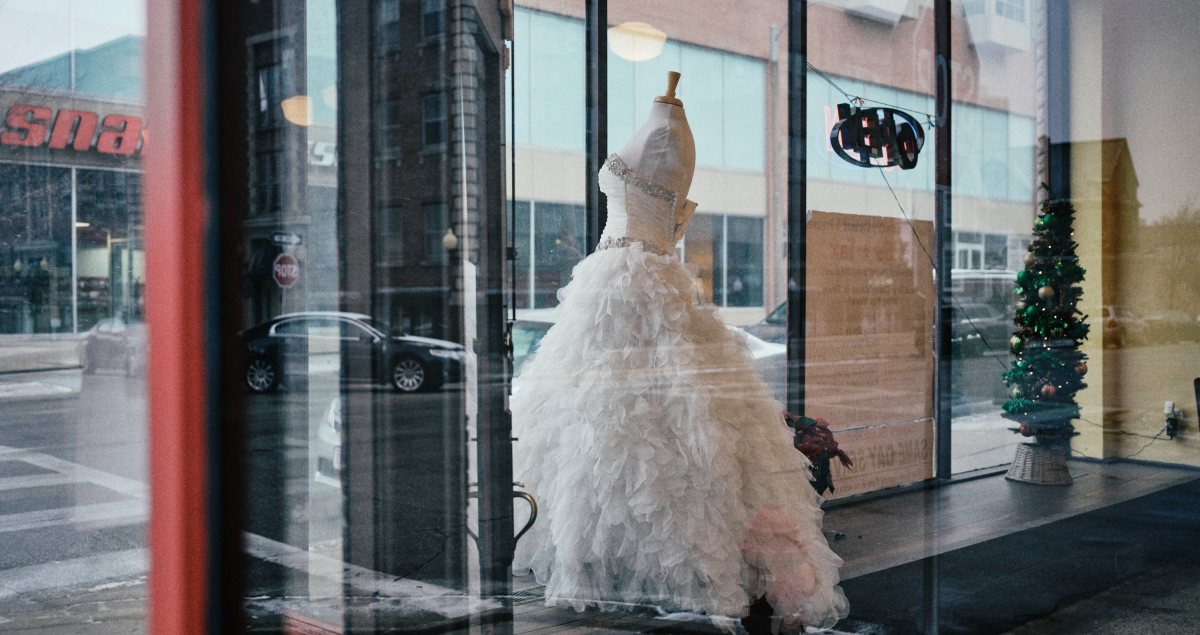 Ok, so I posted a photo a couple days ago alongside my stream of consciousness crisis about what to do with art and photography in the modern age.

(It really wasn’t that dramatic)

And I didn’t mention the photo itself anywhere in my post. But given that the whole underlying point of the post was that I’m going to start sharing again because it seems to force me to not be lazy and critically analyze my work, and given that I absolutely love this photo, I decided to make a post about the art and not my self-absorbed ramblings about Art. If I ramble too much about the concept of art and not instances of art I’ll end up as a professor somewhere.

(Sorry, that was a needless, inflammatory dig at professors…I’m all for higher education, I promise)

This photo…ugh, where do I start? This little corner shop was two blocks away, and it was between me and the lake…which meant I walked by it just about every day. The only thing in the window display is this wedding dress (except for the budget pint-size Christmas tree that they neglected to take down until February). The entryway has no seating. The counter looks like it hasn’t been updated since the 80s. Basically, it’s a dump. But it has a wedding dress in the window…

Given that I walked by this shop almost every day for a year, I took a lot of pictures of it. Day, night, rain, snow, sunshine, tele, wide angle…you name it, I shot it. And while some of the shots were fun, none were anything I’d feel comfortable sharing.

But this one! Ohhh, I love this one… Let’s start with the reflections, since that was the title of the post and all. I got inspired to shoot through glass with a tele lens when doing street photography by studying Saul Leiter. Man, talk about an absolute master of the craft…nobody’s art has hit me harder than his. He has this way of infusing his 2-D photographs with a depth via the introduction of reflections and refractions. And it’s never done to simply make the image look cool…that extra dimension always reinforces the photograph’s story that’s most obviously hanging out in the 2-D space.

So I started wandering the streets of Omaha with a short tele lens and shot through glass after the sun had set. (Not) Surprisingly, I did not magically turn into Saul Leiter. Most of the images were really cool to look at, but that extra dimension was rarely a complementary element to the story. Sometimes portions of the reflections would reinforce the story, but never a critical mass of the elements in the reflection to make the photographs worth anything other than snapshot status.

And that was with a tele lens. I was honing in on tiny chunks of the world, and I still couldn’t make all the elements in the 2-D space work with the reflections. Turns out that shit’s really hard.

And now here I am, a couple years later, gushing over a reflection shot that was done with a wide angle lens. Rather than honing in on a tiny bit of the world, I’ve got about a hundred elements going on here. So what happened between Omaha and now? Did I magically become Saul Leiter or Joshua K Jackson?

No, I just got lucky. Well, I think my conscious got lucky. I’m really not sure what part my subconscious played in this image. Given how often I walked by and photographed this same corner, I have to imagine that experience had some causal impact on this image’s success. Yet the more I looked at it and analyzed it on my computer, the more I noticed tiny elements that reinforced the images theme. I honestly don’t know to what extent I’m just making stuff up after the fact to live into the narrative I’m trying to force onto the image. I imagine it’s a bit of subconscious brilliance, a bit of luck, and a bit of my conscious patting my subconscious on the back a little too enthusiastically.

Regardless, I really love this image. Let’s go through what I like about each of the elements of the image, and (if you’re so inclined) keep in the back of your mind which elements lie on which plane of the image (2D vs. reflection) and how in some cases the placement of those elements in the dimension plane reinforces their relationship to our subject (our beautiful, headless, hopeful bride-to-be).

Let’s start with the One Way sign that’s in the upper right. This was what made me pause and grab my camera. It’s crazy how I can remember that exact moment almost nine months later. I saw that sign and arrow pointing so clearly in the opposite direction the bride was facing, and something clicked in my mind. I was intrigued by the contradiction: some narrator and/or rulemaker is saying “you can ONLY go this way”, and our headless bride is defiantly ignoring these instructions.

Then I remember shifting a little to my left, dropping down a couple inches, and pausing before taking the picture. I have no idea why I made those adjustments in the moment. But I’m sure happy with how it turned out.

I’m guessing one reason for shifting to the left was to get the left edge of the Snap Fitness sign in the frame. This also happened to make the red stop sign on the left third of the frame pop by putting it on a dark background. Red is a color that our eyes are immediately drawn to, especially in otherwise color-dull photos such as this one. Obviously the bride is a focal point, but she’s facing directly into three elements of red: a massive vertical bar, a stop sign, and a superficial Snap Fitness sign. Red is (obviously) associated with stopping, so we get the sense that things in the world are telling her to resist whatever’s drawing her attention beyond her glass enclosure. This is echoed by the red stop sign that sits just behind her back and just underneath the One Way sign that caught my eye in the first place. This stop sign behind our bride is faded via reflection, almost as though our bride’s defiance has blown through its warning and it’s left partially defeated…

Now that we’ve talked about both the stop signs and One Way signs in the image, it’s worth mentioning the traffic. We’ve established that our bride is conflicted. She yearns for something beyond the glass, but everything she sees points a different direction. This contradiction is echoed in the traffic. Looking back on things, this is why I paused before taking the photo: I was waiting for the right cars to enter the frame in the right places.

I got incredibly lucky here.

We have a black car (symbolizing the evil, pragmatic rule- and sign-makers) dutifully following the one-way signs, and we have a dreamy whisp of a white car (symbolizing the purity and innocence of a bride-to-be) blasting into the intersection, deliberately defiant of all the traffic rules. These cars, if they were more than echos and reflections, would be violently colliding with each other in the same two-dimensional space as our conflicted bride. But they’re not. To our headless bride, they only exist as fantasies in her mind.

Unsurprisingly, our bride is closer to the white car than the black one. We know which side she’s on. In reality, the road we see is in fact a one-way moving left to right – the white car is “wrong”. But that doesn’t matter to her, as that street exists beyond the glass, and beyond the glass is a dreamy mixture of contradictions between the real world and her desires projected onto that world.

The white of her dress, which symbolizes purity and innocence, is complemented by the crosswalk in front of her (it beckons, almost pleading with her to come its way) and the reflection of the snow behind her. She’s “looking” forward (though, obviously, not looking since she doesn’t actually have a head…which, I mean, come on, how much more perfect could this get?), longing and being beckoned by a path that, to her, inspires purity, but to us is simply paint on asphalt.

And yet she’s leaving behind frigid snow. It almost looks like she’s halfway on the crosswalk and halfway on the snow…as though she’s enamored with what’s actually a surface-level veneer on top of an ugly, rough world, yet as soon as she steps onto that veneer she realizes what it truly is and leaves behind a cold, regretful disappointment. This motif reached a sadistically comic level when I realized that I took this image in January, yet this sad, budget Christmas tree is staring out the window in a disillusioned echo of our hopeful bride-to-be.

There are other, more minor, elements that I won’t go into in detail here (if you want to explore more, consider the fact that the stop sign in the upper-right is superimposed over the neon “Open” sign and the different colors of red that compose the two elements…or consider the very faint red of the fire hydrant that seems to be trying to catch the last of her dress before she flees into the harsh world beyond the glass). Do you care about these, or even the ones I consider major that I’ve been rambling on about for the past 1500 words? Doubtful. Do I care? I’m not sure…

Which brings me back to reflections. The point of that last post was that I need to use public perception deliberately to prompt myself to refine my craft, but that refinement can ultimately happen most prominently through self-reflection and can be derailed by paying too close attention to the public perception. Contradictions, indeed. Even if I hashtagged the hashtags on this image, it’d do terribly on Instagram. It’s the sort of image I’d never have posted a couple years ago (especially since it doesn’t fit into my “brand” as a “landscape photographer”). But maybe that’s ok. Maybe the dreamy Instagram-Influencer world beyond the glass is more Snap Fitness than Substance. Maybe it’s better to do public-facing deep dives than strategize hashtags. Or maybe not.

I’m still trying to decide if I want to put a head on that bride.