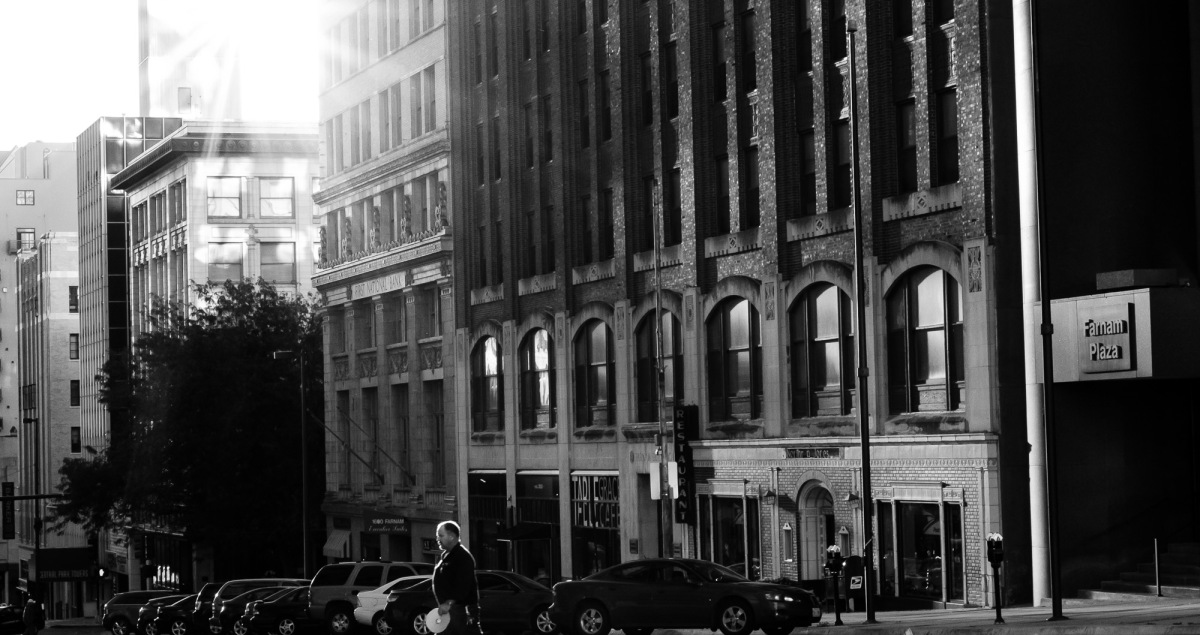 I’ve been on a grand total of three photo walks with the Fuji X-T2, and it’s already changed the way I shoot.

I was not expecting that. I expected the camera to be a little better than what I was used to in pretty much every way, but I didn’t expect it to dramatically affect how I shoot. But it has…at least for street photography.

Let me back up a bit. As long as I’ve done street photography, I’ve shoot in manual focus mode. All of my film cameras are manual focus only rangefinders, so when shooting film I don’t really have an option. But even with digital cameras, I’ve opted for manual focus. This isn’t to say I wouldn’t use the camera’s focusing system – just that I’d do so using the back-button focusing technique. This allowed me to decouple the camera’s focusing and the shutter. This may seem strange if the concept is new to you, but it’s extremely valuable in certain cases.

To illustrate, imagine that you were in my shoes when I took this post’s photograph and you were using a Fuji X100S. This is the camera that I’ve predominantly used for street photography in the past, and while it’s excellent it has a somewhat slow autofocus system. You’re standing at the opposite corner of the intersection as this man, and you notice that he’s going to be crossing the street and will walk right into that beautiful stream of morning light that’s sneaking between the buildings. You want to snap the shutter as soon as he walks into the middle of the light, and you only have a few seconds. If you’re on autofocus mode, you’ll have to center the man in your frame so the autofocus will recognize that’s what you want to focus on, half-press the shutter to focus, wait for the focus system to latch onto him, and then re-compose your image to put him in the lower third where you want him compositionally. That’s a lot of steps, and it probably won’t happen in time for you to grab the image. It’s much easier to stay in manual focus and pre-focus on the crosswalk where the man will be, and then recompose and wait for the perfect moment to hit the shutter.

There’s another option if you’re using autofocus: you can compose the image the way you like it and then change the autofocus point on the camera to be about where the man will be when he walks into the light. Changing the autofocus point isn’t very fast on most cameras, though, so you probably won’t be able to get to it in time when you only have a couple seconds. Even if you’re quick and you get the autofocus point set the way you want it before the man walks into the light, you’re relying on the autofocus system to lock onto him right away when you press the shutter. Otherwise, he’ll be a half or full step ahead of where you want him when it finally locks onto him and releases the shutter and your composition will be ruined.

Autofocus just wasn’t worth it when using a Fuji X100S (or X-T1 or just about any camera out there today). This is where the X-T2 is a game-changer: it allows you to use auto-focus in these situations.

It’s able to do this because of two new features. The first is a stunningly fast autofocus system. It’s on par with a high-end DSLR, which is a huge achievement for mirrorless cameras. Fast autofocus solves the problem of the camera not locking onto your subject right away, but it doesn’t solve the problem of needing to re-compose quickly after the autofocus does its thing. That’s why I still didn’t use autofocus when working with my old Canon 6D (which had a fast autofocus system as well). That’s where Fuji’s second innovation[1] comes in: the joystick! This is a little nub on the back of the camera that can be nudged in 8 directions to quickly move the autofocus point.

So let’s go back to this image and see how the X-T2’s new features allowed me to use autofocus to grab the shot. Rather than the complicated and slow autofocus process described above, I could simply compose the image the way that I wanted, use the joystick to quickly move the autofocus point to the right spot, and then hit the shutter button (and get near-immediate focus-locking) when the man walked to the exact right spot. So much easier!

It’s obvious that the autofocus option has improved dramatically, but you may be wondering why the new autofocus option is preferable to using the manual/back-button focusing approach. The advantage here is a little less clear and what’s best really depends on the situation. It’s true that you could use the same workflow described above (using the joystick) with back-button focusing. The problem with the back-button focusing approach is that you have a little lag between when the autofocus locks onto the subject and when you hit the shutter button. When split-seconds are important, as they were with this shot, that lag can be problematic. In autofocus mode, the shutter will fire immediately after the autofocus locks on, so that lag is eliminated. Of course, you could use the pre-focusing back-button approach described earlier, but then your subject is more likely to be slightly out of focus (since your pre-focusing point likely isn’t exactly where your subject is going to be). In some cases, this may be acceptable…it just depends on the situation.

Alright, I’ve rambled too much about autofocus systems for a single post…so I’ll wrap it up here. Hope that description was helpful to some of you, and let me know if you have any questions in the comments section below. Stay tuned for another (probably shorter) post tomorrow!